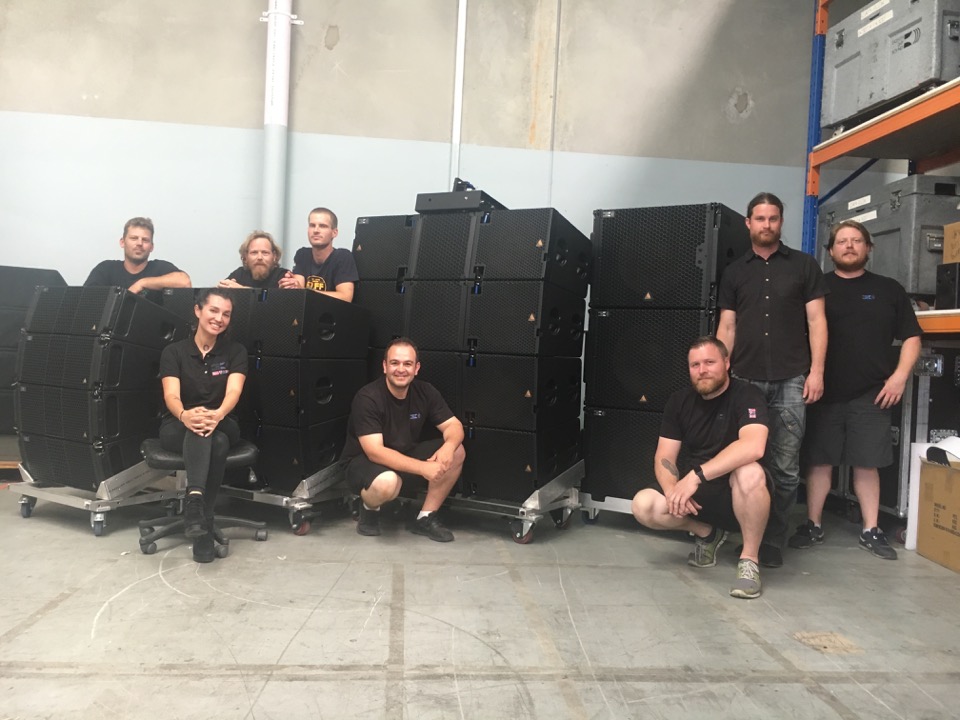 Eighth Day Sound, an early and influential member of Adamson Systems Engineering’s global network, has further expanded its inventory with a substantial investment in Adamson E-Series and S-Series products for their Australian base in Sydney.

Headquartered in Highland Heights, Ohio, with offices in Los Angeles, London, and Sydney, Eighth Day provides sound reinforcement for top tours and festivals around the world. Subsequently, the company has invested heavily in Adamson products in recent years to keep up with the global demand for high-performance audio systems.

“Having Adamson available globally has been a part of our strategy since day one,” says Jack Boessneck, Executive VP with Eighth Day Sound. “With the acclaim it is garnering around the world, we have to be prepared to meet the growing demand.”

Members of Eighth Day’s Australian team traveled to the company’s Ohio headquarters in December 2016 where they and dozens of their colleagues completed Adamson’s brand new Applied Certification Program, which will formally launch in February 2017.

Eighth Day’s new complement of Adamson loudspeakers includes over 140 E-Series and S-Series cabinets and subwoofers. “The E-Series is a powerful addition to our system offerings in Australia,” comments Damo Pryor, General Manager, Eighth Day Australia. “These products are a standard in the European festival circuit and are now exploding in North America. We’re proud to have been the first company to bring the complete range to the Australian market.”

“I had the chance to work with E-Series products for the first time this year in a stadium application in the U.S. The PA threw for days, and we did the entire stadium without delays,” adds Eighth Day's Lead System Tech, Tristan Johnson. “The new E119, designed with input from our team, had a shocking amount of power. I can’t wait to roll it out in Australia and show people what it’s capable of.”

Now boasting an in-depth knowledge of Adamson’s high-performance systems, Eighth Day Australia is wasting no time putting their new fleet of E-Series and S-Series products to use on major events across the country, including dates on the upcoming RÜFÜS tour and some soon-to-be-announced festivals.

"We've had the chance to work with Eighth Day Sound globally for several years now" concludes James Oliver, Adamson's Director of Marketing and Sales. "Their commitment to standardize their equipment offering with unmatched service across the globe makes them an industry leader. We're looking forward to exposing the Australian market to an alternative product currently only available with Eighth Day Sound."